The "Burnt Belief" album, a collaboration between myself and guitarist/composer Jon Durant will be out next week......(see previous posts here and here to hear a sample.) 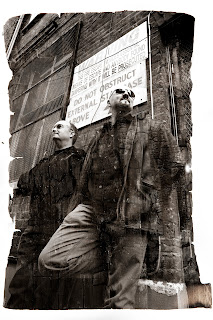 Ordering info for the album is as follows, both the regular digipack CD and the special limited Tin editions are available from Burning Shed in the UK, or Jon Durant's own US based webstore. where you can also buy his previous albums. 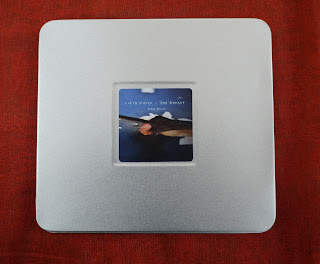 N.B. I am reliably informed that Burning Shed will be shipping the pre-orders just before the release date...which basically means right now.... 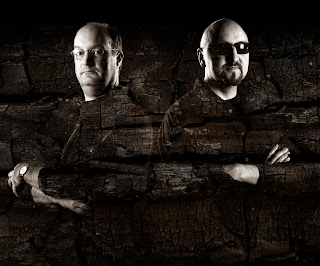 On December 21st, the album will be officially released and available via Amazon, CDBaby, itunes etc.

Below is an interview with Jon and myself by journalist David Bolton, which gives some background information about the inspirations and process behind the album.

The release of an album that deals with the potential end of days on December 21, 2012, could not come at a better time. All over the world, the signs are that the Mayan prophesy might actually not be too wide of the mark, and while we all hope that we don’t have to rely on John Cusack to fly us out of trouble, the portents of doom never seem to be far away.

Here in the U.S., we have the unedifying spectacle of a government bickering over a self-imposed fiscal cliff while the mass media seem more interested in keeping up with the Kardashians than the damage that continues to be done to the environment. Wall Street continues to make oodles of cash for the one percent, and some parts of New Jersey remain no-go areas after Hurricane Sandy.

With this in mind, Colin Edwin and Jon Durant have produced an aural experience that deals with the catalyst for many of the problems that make global headlines…religion. Separated by the Atlantic Ocean, the second collaboration between the pair considers the polarization between religion and science while highlighting the dissonance between belief and reality.

Set to an ambient and progressive instrumental background, Edwin and Durant have drawn from a number of real-life events and inspirations including the (as yet) non-appearance of the Rapture, the unshakeable religious fervor of some parts of the Christian Church and the promises made to believers of a number of Middle Eastern religions about rewards in the next life.

With both artists in different physical locations, I took the time to get to the bottom of Burnt Belief through the miracle of Internet communication…

What is Burnt Belief?

Colin Edwin: The ashes of intellect, fundamentalism and fanaticism, mixed together and scattered to the winds.

Jon Durant: Burnt belief is when you fall for something, hard, and it turns out to be false. For instance, the people who believed that nutjob in Florida (Harold Camping) last year who insisted that the world was going to end on May 21st and gave up everything to follow him.

Or worse, the Heaven’s Gate people or Jonestown. They got burnt, and worse than that, their families and friends got seriously burnt. It’s hard for me to imagine that at this point we still have to deal with this kind of thing, but all around the world, every day, you hear similar stories.

What was the inspiration for the album?

CE: The inspiration for the title comes from my reading Leon Festinger's "When Prophecy Fails" a fascinating account of a UFO cult in the 1950's. It's a great study of what happens to people who try to reconcile delusional beliefs with reality, and also where the term "cognitive dissonance" comes from. It got me thinking, in the end, what are all beliefs really about and where do they come from?

It's a very relevant question, for instance, Science and Religion are actually just as polarized now as they were in the days of Galileo, we just have fewer burnings at the stake. Only this morning I heard a phone-in debate on the radio about "Should the Church of England Have Women Bishops?" What year is this? Oh I nearly forgot, this year it's all supposed to end of course.

JD: Musical inspiration came from a wide range of sources. For me, the desire to blend electronic and acoustic elements in a new and interesting way was a major driving factor. Colin had been getting very involved with electronic rhythm programming, and that brought a major element to the music. And, as with Shadow Planets, the continued exploration of different musical cultures blended in a unique way was also a contributing factor.

How did the project come together?

CE: I had met Jon during several trips to the USA with Porcupine Tree, and was glad to be asked to work on his 2011 album "Dance of the Shadow Planets"  in the role of bass player. Jon suggested in a vague way earlier this year that he'd like to "do more" and I suggested that we start with some audio manipulations that I wanted to do with his Cloud guitar scapes, which means basically creating rhythmic shapes from ambient elements by slicing and feeding them through delays and filters. Once we had started swapping and developing each others’ ideas, it all seemed to flow very fast.

JD: For me, the key moment came in a “new years” greeting exchange in which we both expressed a desire to do more work together. When I mentioned that I felt like the material I was writing was too similar to “Shadow Planets,” Colin suggested that I send him some ideas to mess with and see if he could pull it out of that zone. From there, a discussion of a working methodology followed and we instantly found our direction.

How was the remote recording process different from other experiences?

CE: "Dance of the Shadow Planets" was a live in the studio creation and I think the experience gave us both the background and confidence to know we have a musical chemistry. I feel Jon and I have an understanding and co-operation that comes easily. Other than the time difference between the US and UK, I didn't feel any distance in the creative process, the music was very absorbing to work on.

JD: The difficulty comes in not knowing what is going to happen when it gets into someone else’s hands. There had to be a trust factor—to know that whatever Colin did would be in line with what I had in mind. And, amazingly, there was only one piece for both of us that we rejected and asked the other person to re-do.

When you’re both in the same room, it’s much easier to communicate an idea, and spur one another on when a direction takes shape. Also, on my previous records, all the compositions were mine, so there was a whole control part that had to be let go of.

Burnt Belief takes the listener on a musical journey, a voyage of aural experiences. Was that always the intention?

CE: It's not a conscious thing, but hopefully, it's as immersive to listen to as it has been to create. For me as a listener, that is the quality I look for in music, if I can pass that on in what I take part in, then it's mission accomplished I guess!

JD: I’ve always had that intention. To me, the best music isn’t about saying “look at me, aren’t I a great guitarist” but about telling a story. With instrumental music, it’s really important that there’s a journey involved, and at the end you feel like you’ve experienced something really fascinating.

Repeated listens reveal different layers and tones, do you agree?

CE: Yes, I hope it reveals details gradually; all my favourite albums do that.

JD: I hope so! There are certainly a number of different layers and textures that we utilized, and some are less obvious than others, so when you hear a piece the second time you might find something different than the first time.

We live in a world where people seem to pick and choose which album tracks to listen to. Burnt Belief works best when listened to in it's entirety, but if you had to choose one track for the radio, which would it be?

CE: Probably, "The Weight of Gravity", but I imagine the radio wouldn't play a track that long.

JD: That’s a hard one to answer, especially with an album like this. A couple pieces have really interesting and compelling “hooks”, for lack of a better word. Semazen and Impossible Senses especially. That said, the some programmers who have played my previous work are more likely to be excited by Arcing Towards Morning or Prism. But most of all, I think Balthasar’s Key kicks enough booty to make anyone sit up and take notice!

Where would you like to see the project go, and is there a possibility of live performances?

CE: I am sure Jon and I have more ground to cover together, live performance certainly appeals to us both, it's the most real form of communication and I have confidence that we can present it well.

JD: We’re trying to find the right situation for live work. It’s obviously a bit of an economic challenge given that we’ve got an ocean between us, but Jerry (the percussionist) is also very excited to try to bring this live, and if the right things turn up, we’re very hopeful that we can make something happen in 2013. Assuming the world doesn’t end on December 21st…

Certainly, Colin and I are going to continue working together on future projects. There’s a real connection that we share, and there’s a whole lot left to be explored—I think we’ve only scratched the surface with Burnt Belief.

David Bolton is a freelance journalist and content creator for a Boston media company. With a lifelong love of music, he is always keen to be exposed to new sounds and rhythms although he draws the line at country. He has also spent far too much time in rain-drenched festival fields enjoying wrist-slashingly cheerful music.

It occurred to me whilst recording my double bass on Burnt Belief's closing tune "Arcing Towards Morning" that on the bottom of my bass is a faded sticker which reads "Made in German Democratic Republic" -  a country which, along with it's political belief system, no longer exists......plenty of other examples across history; religions, science, and political beliefs all change, but the world moves on........but I hope "Burnt Belief" will provoke thought and stir emotions well into the future.


I am big fan of phaser ( and other modulation) effects on bass, especially the EBS D-phaser pedal, which you can hear on this track.

Colin
Posted by Colin Edwin at 07:49 No comments:

Colin
Posted by Colin Edwin at 03:04 No comments: 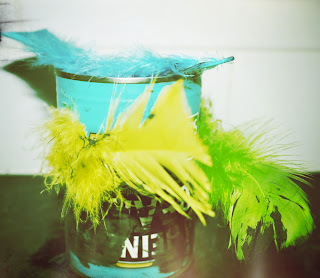 More interesting stuff from the untrained artist today: a splodge of black paint, some coloured feathers and a baked bean tin... amalgamated to create something quite charming, cheerful even. We've named this sculpture "Bean Bird".