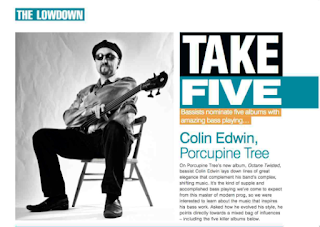 Recently, I was invited by Bass Guitar Magazine to choose five albums which have "Shaped my bass playing", and my thoughts have made it to the current issue.

Of course, there's plenty of things I didn't put on the list, and one of the more obscure choices was this album, which I've been revisiting in a big way :

Another great Gnawa album is "Gift of the Gnawa" by Hassan Hakmoun and the percussionist Adam Rudolph:

I first discovered Gnawa music whilst travelling around Morocco in the late '90's, and witnessed some truly amazing performances, particularly in the beautiful city of Essaouira, (which now holds a yearly gnawa music festival)
Sadly, I didn't document anything I witnessed, but I have since amassed a pretty decent collection of gnawa albums.

The music generally features metal castanets, vocals and the guimbri ( which is sometimes also known as a hajouj or sentir), which is perhaps the closest thing in African music to a bass guitar, although it has only three strings.
It has a limited range of notes, but a distinct deep bass sonorous sound, and I am sure a lot of bass players would find it a rich source of inspiration, hence the reason for this post.
Gnawa music is also very accessible to the ears of most of us Westerners and Europeans, with an almost bluesy, pentatonic tonality and some incredible rhythmic interplay.

I was inspired enough to buy a guimbri and, (at great inconvenience) bring it back to the UK from Morocco. My own guimbri has seen a bit of action, mainly with Ex-Wise Heads, as gnawa music was kind of a catalyst in Geoff Leigh and I deciding to work together.
Anyway, the piece below features my own guimbri playing, a track from the Ex-Wise Heads album Liquid Assets, which also features Geoff Leigh playing his Vietnamese jaws harp: