Just a short update about some of the music I've been working on in recent months.

First off, I have contributed bass performances to some tracks for a forthcoming album by New York based Lo-Fi Resistance, which is due sometime later this year. I was very pleased to have been contacted by main man Randy McStine, as previously I didn't know of his project, but the music is exceptionally good, and it's been a total pleasure to work on. I'll have more to say about this before too long I hope.....

Earlier this year, I got involved with Italian band 'Sound Wall Project' on a one-off guest basis (see previous blog post here), but I have ended up tracking bass on around 10 new songs.

The new material has a strong TripHop influence but there's also a firm progressive element to the material, and some cool guitar parts too. I've just been listening to recent mixes featuring James Hester's drumming, which has given the material an extra dimension.

A short while back, took I delivery of a very fine new fretless bass from Spector, and this has seen action already with yours truly guesting on a couple of tracks from Herd of Instinct's forthcoming album.
Herd of Instinct describe their sound as being influenced by 'Tribal music, Horror film scores and assorted elements of Rock, Minimalism and Crimson-esque prog' so there's plenty to enjoy there.

Last year, I had the pleasure of working with US guitarist Jon Durant on his “Dance of the Shadow Planets” album, and currently, Jon and I are about halfway through a follow-up, only this time I am also contributing both double and electric bass, as well as electronics/programming.

After not having worked on any new material since Schemata, Ex-Wise Heads (myself and Geoff Leigh) have just kicked off a new set of material. Nice to see that Geoff can still encourage me to try completely new things despite us having worked together for well over ten years now....
There's no timetable, but we might have something out later this year.

Following on from PVZ, forthcoming solo material is also in the mixing stage, but this next batch will be different again, having a roughly equal mixture of instrumentals and songs.

There's a few other things I'm working on that I hope will see that light of day soon, but that's all for now......in the meantime, in the rack, some of my tools: 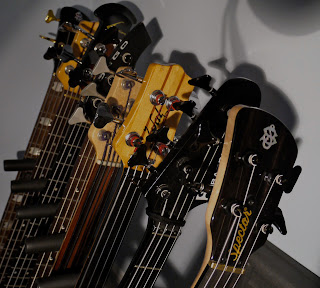